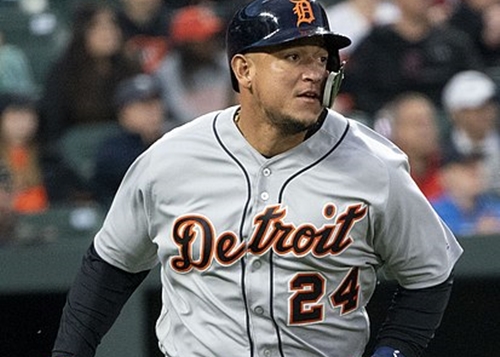 Tigers veteran Miguel Cabrera has had more than his share of injuries in recent years.

Cabrera, 39, now is on the injured list again and will miss at least 10 to 14 days for a left bicep strain, according to the Detroit Free Press.

The Tigers bring 28-year-old utility player Josh Lester up from Toledo to take his place.

It's not big deal for the lowly Tigers to miss any player at this stage of the season. The team sits in last place in the AL Central division with a 51-82 record.

Plus, Cabrera hasn't lived up to his former self this year, batting .256 with four home runs.

In June 2018, he  ruptured his left bicep tendon, which ended his season.

The Tigers' last game is Oct. 5 in Seattle.

'The Week That Was:' Trump's Secret Love of Battling the Justice Department

'The Week That Was:' Dave Chappelle, The Jews and The Blacks

'The Week That Was:' The Dems Overperform but blow the John James Race

'The Week That Was:' The MSU-UM Fight Wasn't a Brawl, It Was a Beating

'The Week That Was:' Will the Latest Whitmer-Dixon Debate Impact the Michigan Race?