Anyone who publishes on the web knows the tricky business of copyright infringement, especially of photography. But the suit filed by a California photographer against Menjos is a little different from a simple you-used-my-photo-without-permission claim. 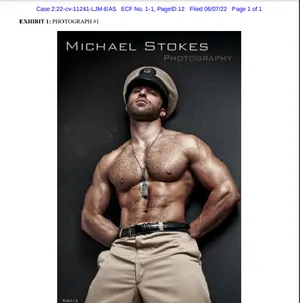 An exhibit from the lawsuit (Photo: U.S. District Court)

Michael Stokes, of Los Angeles, is suing the well-known Detroit gay bar for using his photo of a shirtless man wearing a uniform cap to advertise its "Military Might Night," a promotion that encouraged patrons to come dressed in military attire, enjoy shot specials and perhaps "get locked in the brig." Such come-ons, the photographer claims, "exploits an American service uniform for liquor sales but also implies patriotism and a celebration of country," which could offend service members.

"(Stokes) also tempered the use of models partially nude in uniform — when photographing his veteran subjects," the lawsuit states, noting "photographing veterans in partial uniform is controversial and within the armed forces community is often frowned upon."

According to the lawsuit, the model in the photo at issue is not a veteran of war, and was photographed before Stokes became famous for photographing wounded war veterans.

The photo in question depicts a shirtless man in khaki trousers, dog tags and a military-style cap. The Menjos ad, which ran in 2015, duplicated it for a Facebook promotion of Military Might Night.