Randy Tessier is a University of Michigan lecturer in English language and literature. The book is by a retired Michigan FBI agent and occasional contributor to Deadline Detroit.

If the key to effective writing in the true crime genre is striking the perfect balance between reportage and storytelling, retired FBI agent Greg Stejskal gets it. As he informs us in the introduction to "FBI Case Files, Michigan: Tales of a G-Man:" "I'm just telling the stories."

And tell them he does. Yes, like Jack Webb, he gives us “just the facts, ma’am.” But there is so much more here.

He also dives deeper, informing us about little known facts that do more than entertain, they educate. Who knew the 1978 William Luther Pierce novelistic screed, "The Turner Diaries," was the inspiration for Timothy McVeigh’s horrific act in the 1995 Oklahoma City bombing? Stejskal makes a complicated subject, McVeigh’s anti-government beliefs, easier to understand. 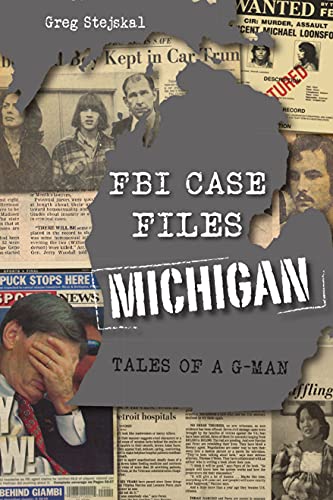 Along the way, we get Longfellow’s poetry, and a perfect gloss on where Paul Revere’s ride really took us historically, a political revolution. Stejskal cleverly elides the legendary film director, John Ford’s, script for “The Man Who Shot Liberty Valance” (1962), with his own involvement in the search for, and apprehension of, the Unabomber – a feat for which Stejskal has been lauded, and even been identified as the man who first fingered Ted Kaczynski.

These kinds of shrewd associations are a constant through the 2021 book and make for engaging, and at times riveting, reading. We get organized crime stories, institutional poisonings, and, of course, high and low profile kidnappings, like Jimmy Hoffa’s still unsolved abduction in 1975.

We move from the wilds of Michigan’s Upper Peninsula, to the Texas panhandle, to the mountains of Idaho; from an Oklahoma City day care nursery to the suburbs of Detroit, through a host of tales that never lose the reader’s interest.

Here are 23 cases of skullduggery, murder, mayhem and deceit that hold together as a piece because of the weave and weft Stejskal achieves in compiling this thoughtful and engaging book. If what we seek in compelling storytelling is a voice, style and focus that keeps us reading, Stejskal succeeds beautifully on all counts.